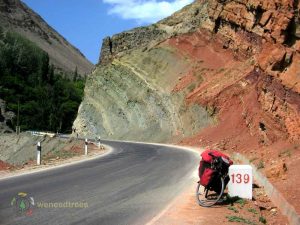 My last journal was quite boring as I didn’t have enough courage to write it well…I don’t know actually why I wrote it when I could do it well.

anyway after our Birthday celebration with Ernct we discussed about going to Iskandar kool which is a lake 24km off from the main road.

Before that also 2 times people had told me about that lake. One of them was a police man who stopped me in a downhill when I was riding at 45km/h …he just stopped me and told me which I should visit Iskandar kool. I was laughing when he stopped me in that speed just to recommend me a place to visit. It was Friday and I had nothing to do in Dushanbe…so that lake could be a nice place to spend a day or two. 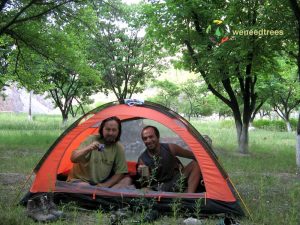 Ernct was on motorbike and of course much faster than me. We planned to meet at the lake and he left. I finished packing while I was eating a lot of apricots from the trees. ( I didn’t care about stomach problem I had because having too much apricots..). when I packed just a small boy came and asked me to give him my tent!!! Such an strange request.!!! I told him this is my home and I cant give it to anyone, I need it. when I was leaving his mother came and asked me to have more apricots..I thanked her and left that place to the beautiful road a long the Zarafshan River.

My mind was absolutely busy with that kids request about my tent…I was feeling that the tent is not mine anymore..it was such a strong feeling, but still I didn’t care about it.

after 3-4km one little boy jumped into the road and stopped me.!!he was I think 3 years old or maybe 4. His little sister came and took him from the road but she offered me to have a tea in their teahouse. She was also not big…she was I think 10-11. Later on I found that they are the ladies in apricot orchard who asked me to have more apricots is their mother. I had a tea there and I bought some bread from the girl!! It was great which she had made those bread herself and I could feel her little fingers on the bread…I could feel the beautiful energy, especially when she offered me those bread in a very kind way.( if you have read my last journals you would know that my tent had no cover and it was not good to be used in Pamir or where it has possibility of any rain). 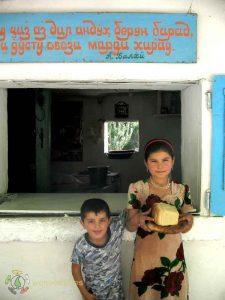 I was playing with my cell phone while I was drinking my tea in that little tea house..I checked my emails and I saw an email from my friend who had offered me a tent!!!! He knew my tent is not good, so he offered me a tent!!! It was really strange. There was no way…I should trust my feeling at the beginning about the tent but still not too late!! Anyway from me it was some kind of loosing because I should trust my feeling at the beginning and I didn’t..anyway I cycled back after I had my tea. that kid and his mother were on the road selling apricots along with many other women and kids playing around them. I gave the tent to them and I taught them how to use it and again I was back to the road along Zarafshan river… 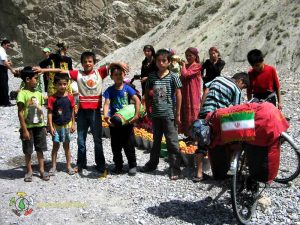 I was feeling comfortable after that. Not a feeling to pull me back anymore. But honestly still I was thinking if it was the right decision to give the tent away or not! I was trying to do not think about it anymore, I was telling myself which I wont need a tent anymore because I will have a long stop in Dushanbe or I may visit Iran during the fasting month, so I can have a new test. But honestly still I was thinking of my tent and even after I knew I will have a new one but I was thinking I could also have that tent as well!!! This is the way human is behaving. Greediness is a big challenge human is facing over the mankind lifetime. And I should admit I am also a human being who is just trying to evaluate his behavior. I bought some stuff and turned right to a small road toward Iskandar kool. It was too hot and I had 24km along the river to the upper part and road was not very fine. 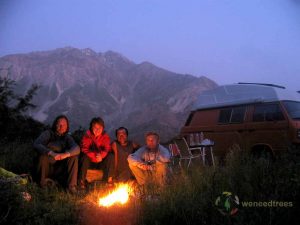 I had some headache because of the heat and still I had cycled just 8km. a car was passing by and I hitch hiked. They were a German and Swiss couple who are working in Dushanbe, so they knew the area quite well and we went to a valley a few km upper than the lake. It was amazingly beautiful, green and surrounded by high mountains. ( regarding to my map highest peak is around 5000+ m). we were 4 persons then and soon after a couple from Switzerland also joint us who are traveling by van. So we were 4 Swiss, a German and an Iranian camping in beautiful mountains. I was planning to stay there a night but where I could go better than that place, so I stayed one more day and Ernst and Swiss couple also decided to stay one more day. we were camping in 2400m which a quite high and a bit cold, but I had to sleep outside because I had no tent anymore…but I had chance to see Moon rising over mountains and also Sun rise which was so beautiful. I woke up 4 in the morning for a short walk and see Sunrise but my sleeping bag and other stuff were totally wet because of damp. So I had to keep them all in the sun to dry out again. I had a full day doing nothing…what I should do? Doing nothing was the best I could do in that heaven. We just made a fire at night and we sat by the fire making tea nad talking about our travel experiences for 3-4 hours. at night I slept in Ernst tent to keep my stuff dry because I was going to leave early morning but I didn’t because of laziness. I cycled back to the main road where still I had 140 km to ride before I arrive to Dushanbe. I had another pass ahead which has also a tunnel breaking the pass but the tunnel has no good asphalt and no light, also it has 5km length which is quite dangerous. I discussed to Ernst and we were planning to support each other to cross the tunnel. At first we were thinking of getting a ride but at last we ended up to go through the tunnel. We had lunch together but he was ahead of me ( of course he was on motorbike and he was faster than me.) Ernst waited for me at the tunnel but just 2-3km before tunnel when I was cycling on a hill an Orange van stopped for me..they were Romy and Miro the Swiss couple we camped together in Iskandar kool. 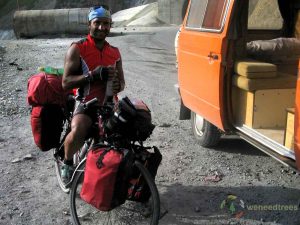 They offered me a ride to take me through the tunnel and I accepted that. It was absolutely a right decision. The tunnel was terrible, dark, full of water and hard even to breath. we passed over the tunnel and then I had 70km downhill all the way to Dushanbe but I had a very strong head wind but it was enough beautiful to give me enough courage to cycle through that road along Varzab river. I arrived at about 9:30 at night to Dushanbe where it could be my last point in this leg of my journey but still I don’t know about it….