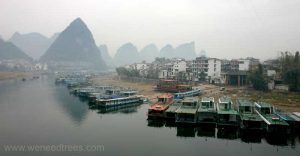 I arrived to China in a very special situation. I was a bit down for a while, it was not anything specific but just I was feeling that I am going to face with something difficult. I was just feeling some challenges are going to play with me and for last 2 weeks before I arrive to China I had the same feeling which was not fun. Anyway it was with me and I couldn’t get ride of that, so I had to get along with that feeling…. I arrived to China around 1pm and I just called a guy called Sam who is my friends friend. I had sent him an email informing about my journey and he kindly answered me telling me to contact him when I am there in Guangzhou.

I didn’t stay in Shenzhen and just straight away I caught a bus for Guangzhou to meet him. I was not sure about my accommodation but I didn’t organize any place to stay so I just went to his office to meet him.. I was surprised, he booked a hotel for me and we had a lovely Iranian meal in an Iranian restaurant which was so good specially after having just Asian food for ages.

The Iranian restaurant was so good and the owner Mr Amir..asked me to have meals there for free while I am there. Such a kindness from him and I was so happy to have all those nice people around.

There was many nice Iranian people looking after me but still that feeling was with me.

The challenge was began and I was going to be run out of money. I didn’t like to ask for help and I believe that it is not my business. I just have to continue and do my job if I am in right path. Anyway I had almost no money and I needed warm cloths. I was going to cycle north where winter is making some cold days and my cloths was just good for tropical countries and not for cold.

My mind was so busy and still no money in my account. GOD was still looking after me. I had a very nice place to stay,,,a very good and comfortable hotel and every meal very nice food but no money in my pocket. I had experienced such a situation like this before and I saw that how GOD helped me but I have to admit it is not easy to deal with such a matter.

I have to work harder and harder on myself to make myself more stronger.

After 3 days in Guangzhou, nothing happened and I was going to leave there without warm cloths. Just on the last night Sam, his friends and I went to walk in Beijing road and Sam found out that I don’t have proper cloths for winter. He kindly bought a jacket and a warm pants for me what I really needed but still my mind was not free.

The other thing I was dealing with was language. It is so hard to communicate with Chinese people when you don’t know the language. Even with body language is hard to communicate. I have been in many places where people couldn’t understand English but I found China is totally different and is much harder.

I am a quit lucky due to I have a very nice friend up in Beijing and she is like my navigator and she makes route for me and we communicate via sms and she help me to find my way. whenever I have any problem just I call her or send her a text asking to talk with people who I don’t understand their language.

Hellen is really helping me and I don’t know without her what I could do. Thanks to her for her support. On the last night I was chatting with Hellen till 3 am to find out where I should go. My visa is just for one month and such a long way ahead. I am not able to make it all the way to Beijing, so I have to take a bus for some part. She told me it is better to take a bus to Guilin and start from there. So I caught a night bus to Yanhshuo which is 60km east of Guilin.

I just arrived 5am and it was totally dark. One guy helped me to find a room and after a few hours rest I took my bicycle to cycle around and do some site seeing which was amazing. I am going to leave here and cycle to the north tomorrow.

I am on the road again in China. I started cycling very late in the morning because I am going to cycle 100km per day and cycle everyday without rest( I am saying this but no guaranty to do that ). Anyway I left Yangshou about 10:20 am after I had a pancake as breakfast on the street.

Weather was fine and enough warm to cycle with cycling short but still sky was muggy and not very good visibility to see beautiful hills around the town. The road was almost flat and many traffics on the road, some small vehicles which are just for transferring little goods to the villages were on the road which was very good to cycle behind them and reduce winds power. After about 30km I met 2 Chinese cyclist with some little stuff who were cycling from Shenzhen to Guiling and we cycled together to Guilin. We had lunch and we cycled about 3 hours together without even one word to talk. But we could understand each other which was a good hope for communicating with Chinese people.

Not many people speak English and most of signs are in Chinese. It is really hard but fun as well and now I am touching this matter on the road. Few times happened that I had to ask people for address and they mostly are very helpful and friendly people. I left my Chinese friends in Guiling and cycled to the north to get out from the town. Guilin is a big city and it takes me an hour to get out from the town. It was about 5 in the afternoon and I started to search for a place to stay. At first I had to be totally away from the city and then I could try to find a place.

I cycled 90km and in that point I found a very big house off the road, I cycled off the road to the house and was shouting Nihaw ( means Hi in Chinese ) to see if anybody is coming out or not. After a short while I found that house is abandoned house and no one is living there…that’s great. Plenty of rooms and no one around. I chose a room which had a small table inside and brought the bicycle inside. I was so happy and informed Helena and after I set up my new home I began to cook some soup to have with some breads I had.

Now I already eaten and just writing my dairy and ready to sleep. It is still 8pm but I don’t have much to do and I prefer to sleep and let my mind have some rest.

I was going to write everything here in my website about my journey but I am thinking that people response might impact my journey, so I think still I have to keep something for myself to write them down after I finished my journey.