From Geneva to Paris 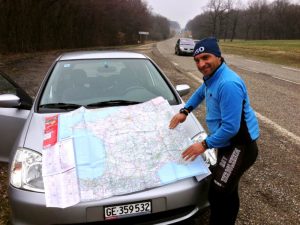 Ron told me he will take me out of the Geneva by his car. It was a nice offer to get out of the town by car and start riding my bike somewhere on the road.
That’s why I left quite late. We were making joke over my plan which what time I would leave. I was telling Ron which I am going to start around 9:30 and he smiled and said: on which time zone? Swiss time, Iranian time or African? This means on Swiss time I would leave on 9:30, on Iranian ones I may leave around 10:30 or so and on African time I will leave anyway!!! I was happy to take African time as it was so flexible and easy one. That’s why we left around 10:30.
he drove me out of the city and when we drove around 30km out of the village where they live, I found a very nice road and just wanted to be on my bike to ride it through that road. So he dropped me there and after I checked the map we said goodbye and I began to ride.
It was a little road with not much traffic. A beautiful one but after just few km I began to climb and in fact I had lots of climb that day. I came to a point which road was split into two and I could chose one. I asked a guy who was on motor bike which one is quicker. And he pointed me the main road. I was following the main road as I was planning to be enough fast . I had 550km ahead and I wanted to make it in 4 days, so I should cycle as much as possible each day. That’s why I was searching for the fastest one. But luckily I made a mistake and I found myself in the other road, it means that even road likes me to be in the nature and wild. It was a wonderful and scenic road. So beautiful, even I decided to stay there and just camp and do not care about the time anymore. But I had so much courage and joy to ride and I was full of energy. I couldn’t stop. I continued riding that day but at last I could not ride more than 88km.
started very late that day and also I had a lot of hills on my way, that’s why I could not make it. So on next days I had to cycle 140km per day instead of 125 to cover the lack of distance on the first day.
I cycled till the evening and then I began to search for a place to camp. Always the first night in a new country is kind of getting to know about people, culture and atmosphere of the place to understand it a bit better. I already had some French friends and I already passed French part in Chamonix, so I was kind of familiar and everything was fine but being in the country is something totally different.
I stopped by a Pizzeria to fil up my bottle and then I met a guy who was running. I stopped to ask if there is any place around I can pitch my tent? First he directed me to a campsite! But I don’t like it. I asked him which I don’t want to stay in campsite and I prefer more to stay somewhere in the wild rather than camping area.
He thought a bit and then he replied “ do you like to come and stay in my place?” what a wonderful offer! And of course my answer was totally clear. “ I would love to “ 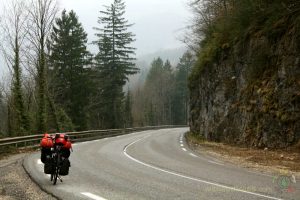 I followed Gill to his house which was just 2-3 km away where I could meet his wife and Alyx, his sweet daughter. Luckily I had some very nice Swiss chocolate to share with Alyx and I think she liked it.
We had a lovely time even though they didn’t speak English very much but to understand people and to feel them we don’t need words, we can talk through our eyes, our hearts and just feel each other and go deep in a friendship without even a single common word.
Next day in the morning when I woke up to meet Gill before he leave, he asked me to stay longer to visit his daughter’s school but I already was planning to cycle to Paris, what a mistake I did.  I should confess which I should have stayed there, then I would have a school and also wonderful people to company, while I couldn’t find any school in Paris. So I lost my chance to do my project in France then.
The second day I should have cycle 135-140km , so I started a bit early but the road was too hard. Lots of hills and till afternoon I just cycled 85km. I was tired and all those little hills killed me. I am more happy to climb 2000 m for 20km more than climbing 100 hills each 100m to climb. Above any of those hills I could see 3-4 hills in the queue and honestly I would say it was like a hammer on my head. I was tired and pissed off but no way, I should do it and I began to push myself more and more. It was almost dark and I was still riding to make it 135 and I stopped on 133km when I saw a very nice spot for camp. 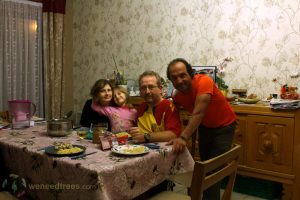 I was tired but so happy to camp after more than 2 months. It was almost 3 months since I camped last in Austria and now again I had a chance to sleep in my tent. It was wonderful and so good to be in the nature, listening to the birds and waking up before sunrise. All were just wonderful and nice.
on the third day I began to cycle again quite early. I should also cycle 140km again. Again lots of hills and again till afternoon I didn’t cycle much.  For my cycling is a part of journey which I can train my mind and my body too. I push myself a lot to help my mind to comprehend my decisions. It is all about satisfying my sport desires, practicing to be strong and reach my destination, making a goal and reaching my goal every day and also providing some adrenalin for my body!!
as I mentioned it was 3:30 in the afternoon and still I had cycled just 85km.my body was not working at all. I knew which the second day could be the hardest one but this time my body was behaving totally different. The third day was the hardest one and in the afternoon I was feeling so tired. 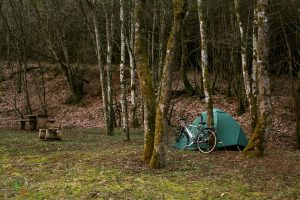 My legs were not following my mind and I had no energy and power. But I knew my body, when I am too tired if I keep working and pushing my body, then it will go over a stage and will began to work again. It can heal itself quite well but just I should not listen to it and do not give up against its tiredness. I did the same and I kept cycling and pushing myself a bit hard. finally I reached that point which my body transferred to the working zone again, it awakened and was fresh again.
I had to push myself and I decided to kill myself. There was no way except to reach my goal. I was not going to be happy with anything less than 140km. ok..then no time for break, stops, food …just pushing. It was 98 which means 70 %, then 112 and then 126 which means 90%. I was cycling very hard. It was almost dark and I was going over 95%, then 97% and then I found a very nice place to camp which it was quite silly to miss it as it was almost dark.
I looked at my speed meter and it was 138km which means 98.3% of my goal. Ok then…I can accept it now. I slowed down a bit and turned to a little dirt road to get off from the main road and hided myself behind a raw of trees in a field.
I was satisfy and happy. 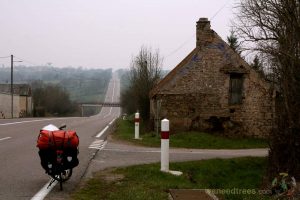 I could feel it, the strength, power, determination and success. It is all about being on the road and trying to achieve a goal. Some little goal every day and to achieve them. After a while it will be a part of my personality to achieve. I can experience success every day, so when I decide to do something, there is no way of disappointing or failure. I am used to achieve. This is one of the best part of cycling. Learning how to achieve, which is great.
Last day luckily I had a quite flat road. No hill anymore and a kind of easy ride and my body were working so well.  I cycled 145km till 6 and still I had enough time to reach Paris. But the road near Paris were a bit complicated and I got lost 2-3 times.
There was an Italian guy who was traveling with lots of loads on his bike.
He was quite slow and I passed him 2-3 times but as I mentioned I got lost 2-3 times and I could see him in front of me!!! I was cycling much faster but in fact he was faster than I. anyway I ended to a highway where I could not enter.
There were many highways and I could not go through, so I called a friend who was going to meet us in the evening. He came to pick me from the road and we went to a hotel. 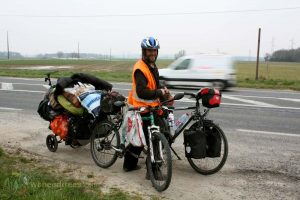 then I could appreciate a hot shower a lot. A long warm shower and a nice and quiet sleep was what I deserved it. 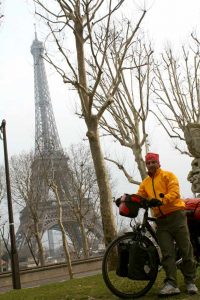