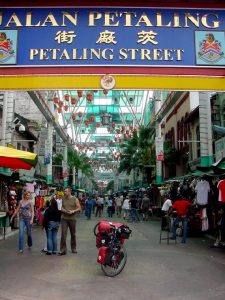 Finally after 3 days restless traveling from KTM to KUL ,I arrived here yesterday night and just after arrival I found that I have to bike to KUL for 70km which was a little bit hard after 2 days sleepless,but weather was cool at night and just 3 hours cycling from airport to KUL was wonderful after 1 month rest in KTM. and about story of trip….

My fly was for 6 Ap from KTM to Dhaka and in the same day to KUL,but as I wrote the first fly camnceled and just a day after we could fly to Dhaka.it was nice due to 1 day more in KTM made a chance to meet Annamaria again and had a nice lunch together and also met Furke again on the street.ok after 1 day delay we flied to Dhaka but there was no fly to KUL and just we went to hotel for a night and we had dinner at 4AM!!!!!!such a nice breakfast as a dinner at early morning.it was a good chance to visit Dhaka for a day ,they said me that I have to be in hotel by 6 PM to go airport and just I went out to visit the city ,but about 3PM I told myself ,oh Mohammad dont trust them about time and just call them ,I called them and they said hey fly is at 5 an dyou have to com eback by 15min.ok…I took a taxi and just they transfered me to airport and in airport they sied that there is no fly to KUL and you have to fly to Bankok and then from there you can fly to KUL!!!! there was no choice and we went to Bankok and we were there for 1 day in airport which is a huge market with an airport inside!!!it was very nice visiting that nice market after 4 month traveling in some places like Nepal.

When I was in Dhaka ,I met 2 girl for Canada and we were on the same fly from KTM to Dhaka ,and they had a fly to Bangkok and then to Cambodia,they also lost 2 fly and just they had to stay in Bankok to wait for another fly to Cambodia,when I was in airport I couldnt sleep and just I was walking ,it was about 5 in th emorning that I met Stephany again and I told her ,hey you are stil here….it was a shok for them…hey Mohammad what are you doing here in Bangkok.you should be in KUL not here…yes the company dosnt have any good schadual and just I am flying around this area to get KUL.

After 1 day in Bangkok and staying in airport ,I came to KUL and I arrived here by 8PM.thats great which I can bike after one month.I took my bike and start cycling from airport to KUL ,but it was 70km and I arrived to KUL at 11PM and just I went to chinees town to get a room which is chipest place for traveler.so I will write more in next report.