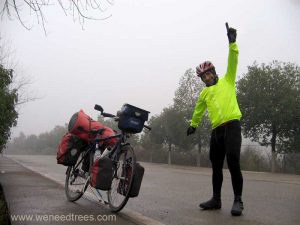 This is the day 6th. I started cycling about 8:30 in a very cold and chilly day. Breathing cold air is going to make some cold for me which is not very good. I feel a bit sore in my throat but I have no choice. I should cycle another 100km and it would be just before a big town called Changsha. Hopefully there can be a place for camping and I can survive by the last 10Y and have some eggs and potatoes. I cycled all the day and again I spent an hour on internet but it was surprising that the owner didn’t let me to pay for internet like last time I used it in the other cyber café. That’s good I can save 2Y which can be 2 eggs.

I was thinking of the following night and what I should do for that, I started to become a little bit worry but soon after I could overcome on that little fear and just remembering the story of last time GOD helped me in NZ was such a assurance that nothing wrong will happen and I will be fine. I was thinking of a warm place and a nice food, ..I had to create it and make it happen.

It was km of 95..almost there and km of 99 means I am there. But it was beginning of the town and nowhere to stay. Everything was going to change and I reached 100 but still nowhere to camp. I was passing the industrial part of town and looking everywhere to find my place but actually my place was not there.

I kept cycling…I was inside the town. A very big city with lots of lights and lanterns hanging everywhere waiting to greet the Chinese new year. People were so busy and just the city was so live. Everyone was happy heading home or shopping and it was easy to feel that energy but for me the story was a bit different.

I was passing nice hotels, restaurants, shops and I had nothing in my pocket and I needed a place to stay…I just kept looking for a sign. Oh gash it is almost impossible to camp in the city and I just have to get out from the town, but it was not such a easy thing. Passing through such a big town was very hard when you don’t understand the sign boards. That’s true there is engelish in sign boards as well but I could understand just one thing G107 which was the road I had to take to get out from the city.

I was tired and it was completely dark and cold. My toes and fingers were just freezing and I was a bit confused. I kept asking people to show me the way out from the town. It could work sometimes but for instance they showed me the direction fro going straight , but I followed the way and I faced with a multi junction which non of them was continuing straight and lots of car and no one there….anyway I had to find the way and I did it lastly.

When I was passing though the city I was thinking of my last 20 Au$ in my account. I thought I might be able to have a simple room in a very cheap guest house for that night which I was very tired. I began to search for ATM machine which can support Visa card. finally I could find one but few times I tried and there was an error. I coldnt continue due to I thought if it does have another error, then the machine might swallow my card and I will be in a big trouble…No Mohammad it seems you shouldn’t have a room tonight and GOD has started a game with you,,,ok go for that.

I knew already that I cant have any money and I cant have any help in that night and I have to just be strong. I passed by a bakery and I looked inside…the prices were not so bad and I could afford for a pack of bread. I bought a pack of chocolate bread for 5.5Y and again began to cycle. Finally I found a sign board showing a lovely number”107”..I was happy and I followed the road. But it took me about 15km to get out from the town.

It was almost 12 at night that finally I could find a very small grass filed between the road and highway. Just before that I found a place in a jungle which I could pitch my tent but when I went there to see I saw it is a place for people to throw their rubbish and I didn’t want to sleep there.

Anyway I camped and when I was inside the tent it was after midnight. I was very tired, cold and hungry. I didn’t have enough power in my mind to hit the gas and cook some water to make a tea and I just ate some bread.

I left my bicycle outside and I even didn’t want to think about it that if it is safe or not ..it was not important at all in that situation. I just needed to have some warmth. my sleeping bag is not for winter and it is really cold but I had to carry on with that.

I woke up 6:30 as usual but today was my rest day..I was a bit hungry as my body use to have break fast everyday about 6:30. I just rise my hands and searched for the pack of bread and I started to take some pieces of bread and it it inside the sleeping bag. I didn’t want nor I could to get out from sleeping bag, after having such a cold night I was getting a bit warmer and I could sleep. I slept again till 10am.

I woke up but no power fro making a tea. I was just thinking about what I could do in such a situation. The only thing I knew that nothing will happen when I am staying somewhere and if I am looking for something to happen I have to make a move but that day was the rest one. I had to change the plan and I had to make a fast decision. I began to study the map and after sending some messages to Hellen I just decide to move. It was 12 and I was on my bike heading to the north for Yueyang.