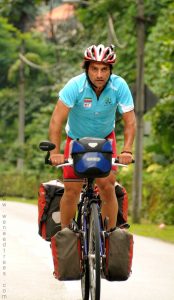 I was ready to leave KL. I packed at night till 2am and Yaser helped me to do that. He was like a person who is going to travel himself and helped me a lot. In the morning I was ready, Yaser made a breakfast for me and then I should go to the agency to collect my visa and start. Ardavan who is another friend of mine and he is also a member of supporting team is doing an interview and he needed some pictures, so I had to delay for him to come and snap some shots for his article.

It was about 9:30 and I saw I had to wait till 11 am so …it is better to stay and leave next day. Actually I was a bit lazy. After almost 3 months do not traveling and having warm and safe place it is a bit hard to start again.

Yaser `asked me to leave next day and I was waiting for an excuse, so I stayed there one more day. I was a bit happy and I told Yaser ok now we can have dinner in the restaurant we were going to have it last night!!!! And we laughed.

Finally I get off from KL but still I have to wait for Ardavan to come and take the pictures he needs. But this time I just began to hit the road and he followed me when he finished some works. I met him about 55km from KL and after he took his shots we had a short but lovely conversation and then it was time to be alone again, to be on the road….to be on my river.

I was very comfortable and I felt just I am doing what I use to do. I was expecting to have some special feeling but it was the same as always which I am on the road…it seems there is no difference and just road is my place and when I am there I feel fine and comfortable.

Anyway I was cycling on the highway E8 toward Kuantan. A very nice and safe road.

Cycling in the highway sure it isn’t fun due to there is no people and no shops and houses…but it is so safe to ride in Malaysian highways because they have a very nice and smooth asphalt and wide shoulder. I was just cycling in hot day that I received a call from anonymous person. He introduce himself ( I already forgot the name). he found my number via my website when he was following an article written in Sinchew daily which is a Chinese paper about my journey.

After a short conversation and saying something regular he told me you look very nice in the picture!!!! What!!! I was a bit surprised and was thinking ohhh Mohammad there should be something wrong!!! However soon after he asked me are you coming to Johor Bahro? My answer was yes due to I am in that direction BUT!!!! He told me are you comfortable with relation between man and man!!!! Ohhh gosh. I was laughing myself and I answered him no!! I am not comfortable in such a relationship. He asked me some questions about my journey and traveling.

When he finished his call I was laughing and just laughing. Ok this is one of the advantage of being in the paper. anyway I should be grateful of Sooi who did that very nice interview because I received many emails and comments and some sms and many visitors in my website. Thanks her.

I continued cycling till half way which was about 130km from KL. There was a rest place with some restaurants and toilets and shops ..what I needed. I stayed there for night but it was abit hot and I didn’t pitch my tent just I sat under a shelter and I slept there and all my bags were around myself . I woke up early morning but still I was tired from the last night, it was so hot and many mosquitoes who found a pair of legs full of hot blood.

However I left there for Kuantan …I had more 120km.

Still cycling in the highway but it was about noon that highway patrol stopped me and asked me to leave highway!!! They told me I am not allowed to cycle in highways. I told him there is no signs to show I am not allowed and there isn’t anything about bicycle, also there was many toll and police but non of them asked me to stop!!! He stuck on his word and I did the same. He told me I have to come back and get off from the highway but there was a rest place with restaurant just next 5km and I was hungry. So I told him I will eat something and then leave the highway from the next exit but he was willing to reverse and put my bicycle back of his pick up and I don’t like that. I told him I am not going to have a lift!! I want to cycle and I jumped on my bicycle and cycled toward restaurant.

I had a very nice lunch and a short rest …I was putting my shows on that one police man came to me. Are you cycling in the highway? !!!! oh gash again I am in trouble. yes sir. I am cycling toward Kuantan. …you are not allowed to cycle in highway!!! The same story. I think the guy in patrol highway already called him and he was looking for me to push me out. But sir there is no sign to show I am not allowed. There is no sign board…yes ! but I am police and I say you are not allowed, if you have any comment you can call highways office later but now you should get off. I will call a pick up to come and give you a lift. He was right and I was ( actually it is true that there is no sign boards because there is no cyclist in Malaysia and people use bicycle very seldom.) but sir I don’t like to have a lift, I am cycling and I want to cycle. I promises you to get out from the first exit….ok if you are serious to cycle that’s fine but I will escort you!!! Oh gosh I don’t like someone to follow me, I don’t feel comfortable.

Anyway there was no way to get ride of police man and he drove behind to push me out.

The first exit was 20km from that point and he followed me more than one hour but to be honest I tried to cycle faster than usual.  aWhen we arrived to the exit and he became sure that I left highway I turned and wave him hands and gave him thumb up to say good bye and say thanks for his work. Actually he was really nice man and he didn’t disturb me. I should have taken a picture of him.

I left highway fro a very busy and unsafe road…road number2 which is parallel with highway but it does not have any shoulder and lots of trucks and motorbike and noise. I had just 20 more km to ride in highway that police pushed me out. Ohhh I like to be there and enjoy the road but no choice. I went to Gombang and then followed the road all the way to Kuantan which was just 25km BUT the funny thing is when I arrived to Kuantan I called Yew Kong who is my host in Kuantan from CS ( couch surfing). When I told him the story of police man, he began to laugh and he told me , hey guy you are so lucky that he pushed you out. I should have told you to take the exit fro Gombang due to if you didn’t take that one you have to cycle 20km more and you would have a longer way to Kuantan. This is the shortest way you could take. I reminded myself again how everything come a long when you are on your path and how universe push you to be on the right way when you don’t know what to do and it is one of the benefits of not having information.

I am in Kuantan right now enjoying living with Yew Kong and his lovely family. I will write about Kuantan later.