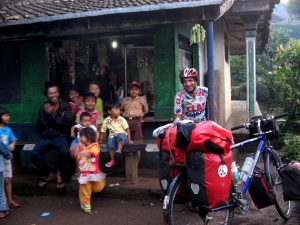 After all those matter which I had, I wrote that I slept in a place just side the road and there was a family who invited me to their house for dinner. It was pretty nice having a comfort sleep, but it was not easy. After I had dinner I began to work on writing and slept late, about 11pm. But after few hours I felt a very bad pain in my stomach. I couldn’t sleep for about 2 hours and just turning around myself like a snake. Finally I saw that I cant continue and it is better to empty my stomach.

I tried to vomit and I did. So bad feeling in middle of sleep on the nature. However after I empty my stomach, I slept and in the morning I woke up but no taste for any food. I began ridding just with a plain tea and after 2 hours cycling I felt hungry, but the smell of feed was terrible for me. Just I had some pieces of bread and honey and again hitting the road.

I cycled about 8 hours in that day, but no eat. Even in the evening I couldn’t go about eating rice and…just few times drinking rehydration stuff to provide some electrolytes for my body and just cycling. In the end of day I found a shelter in a petrol station and I put my tent there, still hungry and no appetite for any food. I thought good to have a roof for my tent, but the heavy rain began to hit the earth and the strong wind splashed water under the shelter, so after 30min my tent was completely floating on the water, hopefully inside was dry but I knew that in the following morning I have to carry few more kg weight and it will bring me some broken spokes and it did. I could eat just some biscuits and some watermelon and no food. I was asleep that Hafiz who is security guard in petrol station woke me up for dinner. Hi had bought some food for dinner and asked me to share with him. I was hungry like a pig and just jumped out of tent to eat something. In the following morning I felt so tired, but there was no choice except going and I did. But in that day I didn’t cycle very much and just about 70km. then I found a small town and I got a room to rest. My bicycle was completely out of work and I had to fix it, but at night whatever I tried I saw there is no energy to work and just I died.

In the next morning I woke up about 5am and began to fix my bicycle. It took about 3 hours and after having a nice breakfast I began again to hit the road….250km to my next stop and 2 hard days. Having half day rest made me a little bit fresh and also some food. I began to ride about 10am and just cycle and turning the wheels. It was about 5:30pmand I was looking for a place to stay, but I had about more 10km to cycle. One motorbike came to me and began to talk. Smaeel who was living around there, could speak English and we talked for few minutes. After that he invited me to stay with them at night. So wonderful offering and for me it was the best. They gave me a nice room with a big window opening to the jungle and oooooooh after having a shower, everything became cool.

The last day before Jambi ( a small town in Sumatra) I had to cycle about 150km and it was a hard day. But I needed a nice sleep and I couldn’t wake up early, so I had push myself to do it. It was about 3 in the afternoon and I saw that by this speed I can reach to the town before dark. But the chain couldn’t tolerate the pressure anymore and it broke. I sat side the road and under a hot sunlight to fix it. I was just sweating, so hot. However I needed a chain to turn the wheels and after half hour I fixed it and began to ride again.

I reached to the town about evening and just I found a hotel to rest. Nice shower, internet, food….what I need on the road and they are all available here, so here can be a paradise for a hungry and tired cyclist. I want to stay here for one more day to rest, due to after here I will have about a week cycling for everyday.