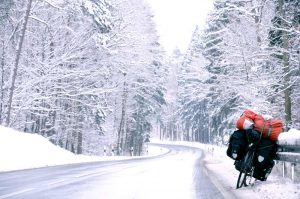 This is my second part of journal from Germany.
I was cycling through some cold and snowy weather, camping in snow and enjoying beautiful scenery all around myself.
It was great to see snow again and be able to see a different picturs of nature.

I left the forest and cycled to Kassel and I arrived there in the evening. I had cycled 2 hours in the evening in dark actually because it was long and I had some hills on my way so I was quite slowly in hills. It was about 6 in evening I arrived there. I was in my friend’s house for 2 days. I was planning to stay there more but I just felt I have to leave .
I was going to be in the road. After 2 days of moveto an old friend in Kassel to celebrate the Christmas Gif with my friend,my old friend went back home and I was there justfor a night. Then my next destination was Freiburg near Frankfurt where I had some friends waiting for me to meet them. But 2 days before I left Kassel, I received an email from a guy named Christian. Hesent me an email in my facebook and said: ”hi Mohammad ,
I was following your journeys since 2012 or 2013 when he was in Armenia. I saw your picture near Kassel. If you are around Kassel, I live in Rittershausen just very close to Kassel. If you pass by, it would be great to be your host for a night and you can stay here”. When I read this message I thought it is quite amazing to meet a person who is not even your facebook’s  friend and he was just following your journey and now he is very close to you. It is a chance to meet a person to make a new friend. I looked at the map. Rittershausen was not on my way actually. It was far the west while I had to cycle straight and straight from Kassel to the south to Freiburg.
I was so tempted to be a friend because I was thinking a person who is concerning about you and who was following your journey and sent you a message to meet you. You have to meet that person. I sent a message to Christian to inform him that I am going to visit him.I left Kassel in the morning after the Christmas Gif. I had 125 kms to Rittershausen. I couldn’t make it in one day and also it was very small for 2 days. One day would be 80 or 90 and the other one was 20 or 30. It was silly for cycling 20 or 30 kms a day and I was just losing a day. So I decided to take a train for 30 kms and just leave 88.5 kms to Rittershausen. I left that train at 10:00 and then I can cycle to Rittershausen. It was a bit cold day. There was a couple of hills and the road was not flat with lots of up and down.
But at the last hill, it was quite long hill when I climbed and I was on the top in the evening, I stopped somewhere to just get my reflection jacket to wear. A car stopped. A guy came and said :” are you Mohammad?” I answered yes.He was Daniel,the brother of Christian.So Daniel took me to Christian’s house. When I was in Christian’s house,we began to talk. Not very often happen that a person has so much interesting things to say. I just sit and hear and follow his stories. I was not even checking my face book very often just I left my laptop and cellphone and listened to Christian. He was a so interesting person.Before he told me about the project about the tree which, he used to play when he was a very young and that tree was quite old and that tree fell down. He told me about the projects he wants to make a memory of that tree with some light. When he wrote me about that, I said ok maybe he just wants to put some light around and makesa picture but when I went there and he told me about the project and explained how he is planning to make it, I was quite astonished because it was like a big project. I was so curious what he is doing.The next day, I told him that I am going to stay one more night to spend more time with him. The next day it was sunny day and very quiet. We went to bike some forest and then we went to see his tree. After we visited his tree, we went to his workshop and also I saw that he is making CNC machine . if he needs to know something  just goes and studies and learns it. That was so interesting. The way he explained to me I realized there are very plan to do something. He just looked so far on everything.

The Second day, I spent with him and just in the evening we went to his mother’s house to have a coffee and very nice conversation with his mother and then I came back and packed every things to get ready for cycling in the morning. But actually it started snowing. The hills were a bit high so in the morning it was hard snowing and the road was just white and slippery. I had no chance to cycle. I needed in that road with lot of down hills. It is almost impossible with my tire because I don’t have winter tire. The road was not clean yet. The only thing I could do it was taking train to go to Freiburg. I called my friend in Freiburg and told him I would be there quite earlier about 1 or 2 hours because I am going to take a train. Christian put me in the first station and from that point I took a train to Freiburg. I think I arrived around 2 in the afternoon and I went to my friend’s house. Actually they were not my direct friends. There are the parents of my friend in Iran. They are very old good friends.
Here I was seeing them. I stayed 2 days in Freiburg. It was all about siting, talking and I just went to Frankfurt to have some sighting. it was Sunday and everywhere was closed. It was a very cold day but anyway I could see some little things from Frankfurt. On Monday morning, I was supposed to leave. It was still lots of snow onthe ground. My friend said: It was cold and snowing and you shouldn’t leave and you have to wait some more days for the good weather but I decided to leave and already I organized with my German friends in Nuremberg to get there on the first of January because I was planned to get there in the Sylvester night but they said that they have a party and I should get there by first of January. Because of snowing,I must not be able to do lots of kilometers a day. In this case, I am not quite fast and I have enough time to cycle 50 kms in 3 or 4 days to Nuremburg. Actually I needed 3 days but I just wanted to make sure that I arrived on Monday because if it snowed and if I got stuck on the road then I can’t make it.

The first cycle was about 75 kms. I didn’t leave quite earlier. I left around 10 o’clock in the morning. Some part of the road was not clean at the beginning and it made me to ride quite slow but after that it was OK and I could cycle quite fast.Not quite fast is a normal speed. I cycled till evening then I was looking for a place to camp. I found a holiday home and I saw that there was nobody there. They had a kind of parking for the car near the road. It was quite flat. I could put my tent. It was ok. Nobody was there. I pitched my tent. It wasa very cold night actually. I was inside my tent. I cooked something and I ate my sandwich then I lied down to get warm a bit.
Then I opened the tent to get out. Suddenly I saw a car just came in. it stopped in front of my tent. I was quite surprised. I straight away to begin to explain that I was travelling an I showed my bike and I was camping here for a while. He said no problem stay here and I put my car the other side. He said:“the outside is cold and we can have a tea together and you can sleep inside”. It was so good and that’s lovely. His name was Uly. We went inside. It was a beautiful house. It was an old mild.

So I brought my bags inside but I didn’t pack my tent I just left there. In the morning I woke up after having a very lovely nice night in that holiday home. We had coffee and breakfast. I realized it was snowing last night  and it was enough to stop me cycling because there was lots of hills and up and down. The road was totally white again. Again there was a situation I couldn’t cycle. Oh what can I do now? Uly said:“Mohammad I think you could not cycle here because it could be dangerous. After 20 kms, you get to the main road and you get out of mountains. The main road should be clean because they clean it but they don’t take care of the small roads. So you don’t need to climb much and I will take you the main road”.It was wonderful. After having breakfast with Uly I began to pack my bag and tent.
Uly put my bags and bike in the car and he drove me about 20kms to main road. At the end of the day,I could cycle 85 kms and just it left 55 kms for tomorrow. After 85kms I found a nice place to camp and I got out the main road. I cleaned the place from the snow to pitch my tent. Now I am in my tent, out in the nature in a beautiful place. There are lots of snows around me with the little forest in the background. This is life. This is a nomad life ….so much peace and quiet and I love it a lot.

So to the next story, I wish you lovely days and I wish you actually a happy new year.
January 4 2015