Home EUROPE Poland Cycling from Warsaw to Krakow- winter is showing up now!!

Cycling from Warsaw to Krakow- winter is showing up now!! 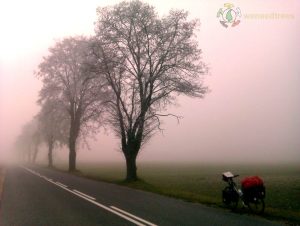 As always I slept too late at night before I left Warsaw. Always is like that, when I stay somewhere for a couple of days then I make a big mess around the room and it takes hours to clean up and pack again, also I had to write my dairies, do radio reports…so I slept almost 3:30am.
Before leaving Warsaw I should meet Katalin to get the things she was making for me, so I cycled to the center to meet her and I left city at about 11:30.
The weather was quite nice, not that cold and luckily dry, so I could cycle about 85km which was quite fine for such a short time.
It was quite hard to find a place to camp because there was not that much forest there. There were many apple orchards and not any wild area to hide and camp.
finally when it was almost dark again !! I went through a small village to access to a little forest and I camped there, a very peaceful and quite night, away from the main road and not so much noise from cars. I had so much to eat that night. Some salmon, salad and fruit yogurt was good enough to enjoy a meal and of course a coffee at night alone in the tent. 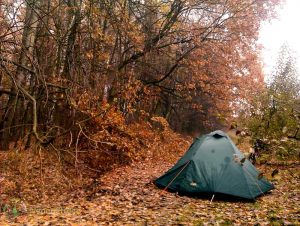 Next day in the morning was foggy and a bit cold. I started cycling at 8:30 but it was really cold. I could manage it somehow but a flat tire was not a pleasant thing to have in such a cold weather when my fingers were not able to fix the tire, but no way. I had to fix it and I did hardly.
20km farther again flat tire!!! There should be something wrong with my tire so…I checked it. The tire was broken a bit and it was useless to fix the tube again. I had to find something as a cover to prevent it from another flat tire.
I was searching for a piece of tube or anything I could use around but there wasn’t any. A 50 years guy came out from his house nearby looking at me. I could understand him what I need and he crossed the road into a farm and after few minutes he returned with a piece of motor bike tube.
OK..great, I fixed it but I didn’t put enough air on my tire because it could cause it to blast. The bicycle already started to complain about the hard work it is doing!! Actually this is a good bike but for the city not for such a hard work, but I hope it last long. It is pity which after so many years of traveling still I don’t have a proper bike!! All my equipments are just great but bicycle..!! anyway I keep the hope for the proper bike to come but I don’t wait for it. I continue with what I have now and I enjoy it as well. Whenever the proper bike comes, welcome and I will enjoy more and travel much easier and more comfortable.
after 2 times having flat tire I lost so much time, and I couldn’t cover the distance I was going to cycle.
I was cycling through the road no 728 but in some point it merged to a highway and I had to follow the highway till again the road 728 splits from it. It was almost dark and I was following the highway to reach the junction and I was thinking which I will stay as soon as I get into the smaller road but after 10minutes I realized it is a bit crazy to continue in this highway while there are so many trucks passing by.
so I just get off from the road as soon as I saw a path into the forest and I followed it into the forest till I couldn’t hear the cars.
it was absolutely dark and Icouldn’t use my headlight as I didn’t want to attract any attention. I should be invisible. Anyway I found a flat ground which was good enough to pitch the tent and sleep well. 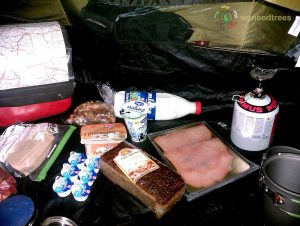 It was cold and a hot coffee and a potato soup were so pleasant.
after dinner I just lied down and fell asleep. I woke up at 8 to wash my teeth and again slept. But at about 1am I was so hungry and I woke up to eat again.
Regarding to the map I had more than 100km to cycle to Krakow, so I should use all day and do not waste any time. I woke up at 6, an hour before sunrise and after breakfast and packing I began to cycle at 8 which was really good.
I was still in the forest, cycling to get into the main road and then follow it to the road 728 for Krakow. Just after 200m my tire blasted…not a pleasant start. I had to push the bike all the way to the junction which was about 4-5km and I had to find a lift to take me to the first main city.
because of so many little villages on the way, it was hard to find a lift. A bus stopped and I asked him the direction he was going. I couldn’t pronounce the name quite well, so I had to get my map and show him.
He said yes and he repeated the name 2 times. I was happy when I felt the warmth inside the bus. Outside was freezing and cold. I just came to my bike to take it to the bus which I saw the bus left there. I ran after him and was shouting but he didn’t hear it. He was going to the same destination but he thought I am asking the address!!! I was waiting more than 1 hour there while searching for a little sun ray which was shining through the trees!! It was really cold.
finally a car stopped and a guy took me to the first city and helped me to find a shop. It was a hardware shop but they had tire as well !!! the tire was shitty but no choice. I didn’t like to push my bike any more. I was even happy to buy it and go to the next city and but a good one but not push the bike even for 100m. the tire was fixed at about 11 and I sat on my bike….such a pleasant feeling. It was for me like freedom, flying and a beautiful joy to see the white lines under my wheels again. 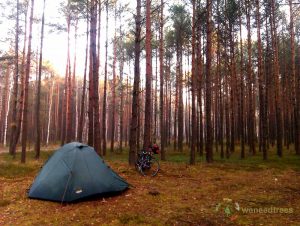 it was sunny in the morning but in this area was foggy and so cold.  All the trees were frozen. Of course it was beautiful too. The road was hidden in fog, a mystery of horizon which is absolutely great to cycle through such a road. But in the other hand my fingers were freezing. I have 3 pairs of gloves but I think they are not working quite well in that cold. I should look for something extra too.
at about 2pm I arrived to a big city but still I had almost 80km to Krakow which was almost impossible to make it that day.
I went to a shop to eat something and as soon as my fingers began to warm up, a big pain passed through my fingers.
I decided to take a train to Krakow because I should get there that night as I had a school to visit next day. Actually I didn’t know about the school yet but my feeling was telling me that I should be there tonight.
so I went to the train station, the first train was for 17:22 and I got the ticket.
I had to inform Anja as well about the time I would arrive but my cellophane was not working for no reason. For last 3 days it was not working and I could have access to anyone. No one to talk and I was just apart from the world for 3 days. Of course in such a situation so many thoughts come to my mind but I just delete them and ignore them all.
always when I have such a hard times, one of the best way to relax is eating for me. So I went to a supermarket and I bought something to eat and returned to the train station. At least it was warm inside and I could wait in a warm place.
I arrived to Krakow at about 7pm. Out of train station I asked a lady about direction and she replied: I don’t speak English well and I don’t know exactly where it is but just I know that you should follow that street all the way to your destination!! And she pointed to a street across the main road.
a new city at night in a very dens foggy weather is like a mystery. But after 30minutes I was at home and a hot bath was just great to let my legs feel warm and happy.