Home ASIA Azerbaijan Baku and having some challenges

Baku and having some challenges 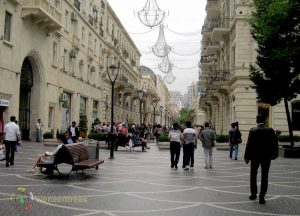 I arrived to Baku in the afternoon but I had to wait for 2-3 hours for Jamil ( A person from CS who I was going to stay with him) to come back home. I cycled a bit around the city. A very beautiful and well decorated city which honestly I didn’t have an impression for that like something I could say wow!! I remember when I arrived to Tbilisi I just said Wow but Baku even though is more clean, better decorated and looks like much nicer didn’t makes me say Wow. I don’t know what was the reason I didn’t have that deep feeling for the city. Anyway it can have many reasons which here is not a place I can discuss about it. Jamil called me and after few minutes he picked me up. His house is located in a nice part of the city, very convenient for me to travel around the city. I was tired and in that day I didn’t want to go outside, just I needed some rest and having a shower after 7 days of not washing myself. I was stinky which made me feel so bad. I had to stay in Baku for 8 days before I could enter Kazakhstan because my visa for Kazakhstan starts at 30 May and in between I was looking to get my visa for Kyrgyzstan, also I had to find a school for my project which was quite hard for that time as school were having exams and soon after they would have summer holidays, so I had some difficulties to find a school. Next day I found out there is no embassy for Kyrgyzstan and suddenly it made me feel so down. To be honest I felt that some hard challenge is coming and I should be ready to face with. It took me 2-3 days to overcome on that fear and within those days I could not feel fine. I couldn’t do my job and even enjoy the life. I was feeling alone ..one day I went to walk along the beach. I knew no one. Jamil also is quite busy during the day and in the afternoon when he returns we have no much to talk. He is such a person who does not talk more and very quiet but very kind and helpfull. I was absolutely alone. Oh my GOD… I need some friends, I need someone to talk or to share some times and I had to make it, also the situation I had was not easy to understand or to take, so it made me more upset. But I am not a person who let sadness overcome. few days passed and still no friends in Baku which was actually quite strange for me. The reason which made me sad could actually come from the idea of traveling with no plan. I travel with no plan and I just go where the road takes me. So when I think I should go somewhere and it is blocked I feel somehow I am missing the way and I have to start trying to find the way which is a bit hard work because there is no guaranty that the new decision is right or not. I had another possibility which was getting visa for Uzbekistan and go through Uzbekistan but I knew its visa is a bit expensive. Almost 100$ and all the money I had was about 50$. I was real upset. No money for even visa, next 2-3 days I had to get a ferry to Aktau in Kazakhstan which I had to pay 110$ for its ticket and still don’t know where is my next destination. Those 2-3 days were so hard and I was also still alone in that city. I counted my money..a note of 50$ +20 Menat+ 20 Au$ in my bank …good they can be 100 US$ which is enough to get my Uzbekistan visa and I didn’t think about the ferry. It made me a big hope and brought me back the power and gave me again energy to enjoy life. Next day I visited Uzbekistan embassy and I talked to the consul. He told me he needs a letter from Iran embassy. I went again to Iran embassy and they guided me to the consulate..after few min talk with the consul he told me I can get my letter on the next day and it was a bit late for me because Uzbekistan embassy would be close tomorrow and I had to wait for the next week. I insisted and he told you can pick your letter at 3pm. I was there exactly at 3 but the guy was not available. The letter was ready and it needed just his signature but he was late for almost 45min. I was a bit nervous at first but also I was trying to calm myself down. He came finally and I got my letter. Just before I leave there I met 2 girls who were there to apply for visa. I began to talk…”are you going to travel to Iran?” one of them replied “yes”. And next questions and it became a quite long conversation. I found out they are some volunteers from different countries working in Baku with kids who are living in a campus where refugee people are living. 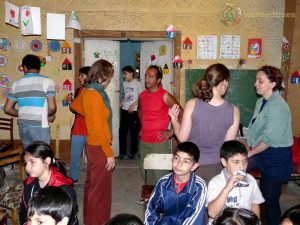 I told them about my project which is working with kids…and everything was going to work out again. I visited their place where they work in the same day after I returned from Uzbekistan embassy even though Uzbekistan embassy refused to accommodate me visa. But I didn’t care, I was thinking it was just a reason to meet those people. after I met them in campus we went for a walk along the beach and we had a drink together. now we were some friends and I had someone in Baku. We planned to make our workshop on Saturday and plant a tree with kids. Jamil were going to leave Baku on Saturday, so I had to find a new place to stay. But fortunately t Diedrik and Segulen told me that I can stay with them, so I went to school with all my stuff. I think it would be no=ice to know that I bought some drinks and cakes for 25 person to serve in our workshop and we were exactly 25 then. Workshop was so nice and after that we planted a tree. In regard of the promise I gave to the kids I had to play football with them. It was so cool. So I had a place to stay then with those lovely friends I found. I was feeling so good to have them around. They are so cool and nice. Kind, positive and we had a lot to talk. I had very nice conversation with Segulen till late at night and also with Annemarie, Diedrick and Sergio. Annemarie told me about her walking around 800km in Spain and her spiritual experiences. I was feeling so good to be with them. 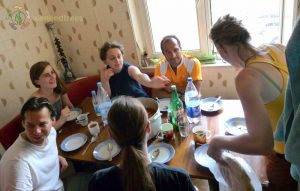 My job was over in Baku and I had to wait 2 more days and get the ferry to cross the Caspian Sea. But in fact I had no money for the ticket and again struggling with myself to keep it just for myself and to do not tell anyone about my situation. I knew I should be fine but still after 4 years of traveling and having experience these kind of situation still sometimes I have fear..I should admit that I am still not that much strong to face it happily which is a goal for me to face with this kind of stuff and still have joy in my heart and do not have any fear, but in that time still I had some. It was time to leave the country….I had to get the ferry but still no money and still I wanted just to trust and do not ask anyone for help. one day in the morning I packed and said goodbye to my friends and I left home for the port. Oh my GOD it was so hard to ..my legs were so heavy and I could ride. I couldn’t get closer to the port. I was thinking what I should do now? Here is the edge..I had to but ticket and I can’t ask them for hitchhiking because they don’t understand even a single English word. How to talk to them? There was no ferry that day and I had to return home again. In that night we had movie party at home and some of our friends came over to watch “Lemon tree”. I received a text message on my phone from my brother while I was watching the movie..he told me that he has sent some money with a friend who works in Baku for me. He gave me his number and next day I had enough money to but ticket!! I went to the port and I got the ticket…..It was time to hug my friends and say goodbye. As always it was hard to leave them again. I just can say I love you and I am hoping to meet you all again.